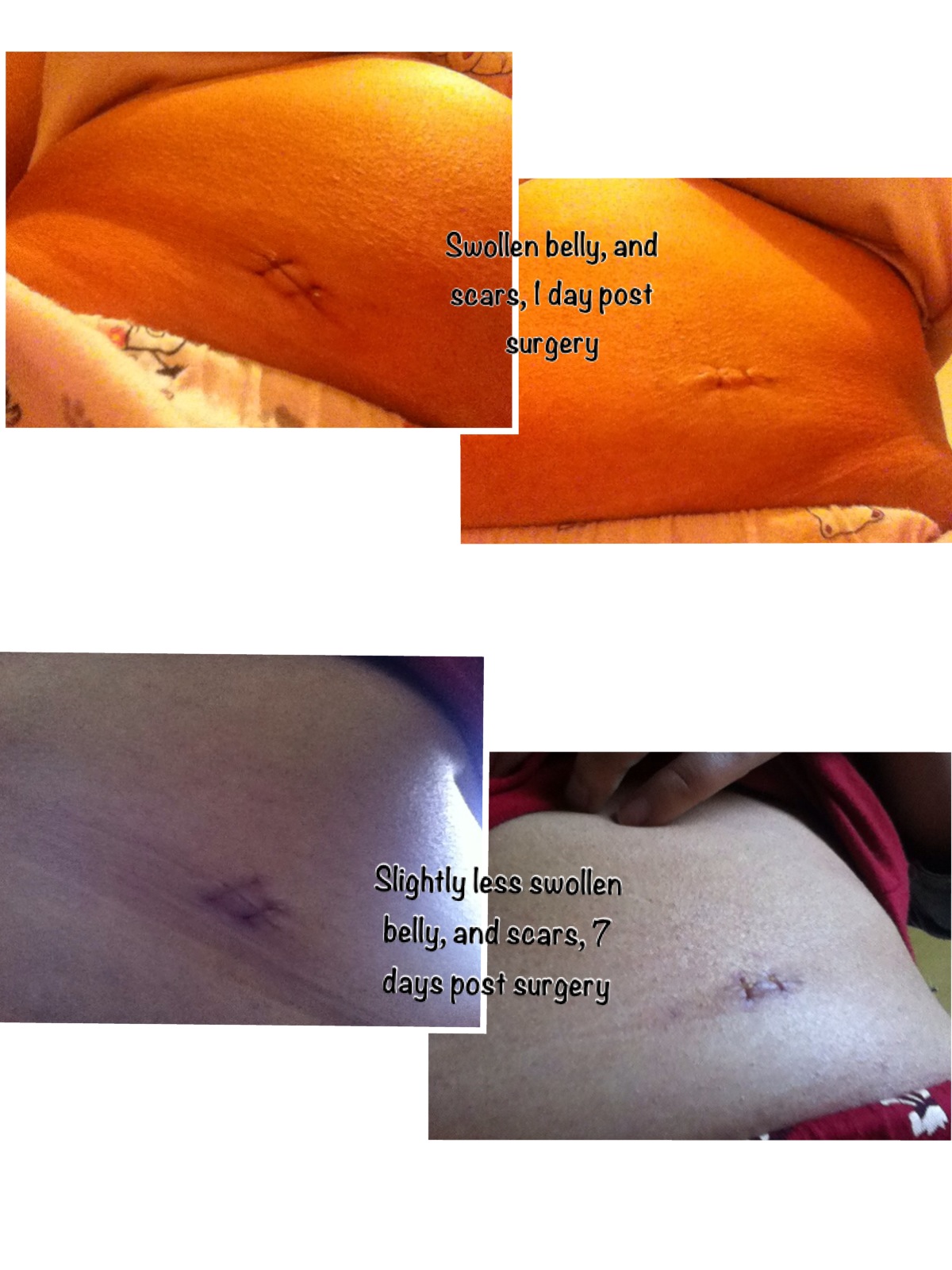 About this time last week (11.30am as I write this) I’d just been wheeled back up to the ward having come round long enough in recovery to ask where my husband was.  Other than a few undignified moments, the rest of Wednesday, 2nd January 2013 is pretty much a blur.

Symptoms of Ectopic Pregnancy
One sided abdominal pain – No
Vaginal bleeding (bright or dark red, can be mistaken for a normal period) – No, just on/off, ever so minimal light brown spotting
Shoulder tip pain – No
Bowel pain – No
Diarrhoea and vomiting – No
Collapse (seek emergency medical treatment) – No

The Saturday evening before New Year I started spotting, only a tiny amount on the toilet paper but naturally it panicked me.  At first it was a light pink colour but very quickly turned to brown (old blood), and was only ever on the toilet paper and such a small amount. I decided to call the new 111 non emergency medical number just to see what they suggested, I certainly didn’t want to go in to A&E on a Saturday night.  After 20 minutes I eventually got through to a lady, who was obviously reading from a script, but nonetheless she was helpful and told me the on-call Dr from my area would call me back, within 5 hours!!  This meant any time up to 2.00am, but thankfully the Dr rang back within an hour.  In conclusion I was told to keep an eye on it, and see my GP on Monday for referral to the Early Pregnancy Unit (EPU), but should the bleeding become heavy, to call for further advice.  It didn’t.

New Year’s Eve (Monday) I called my Dr’s surgery first thing and got an appointment for 9.15am.  The GP asked me some questions and examined my tummy.  He called the EPU with my details and was told I could expect a call back anytime up to 8.00pm that night!  No phone calls came so I went to my Acupuncture appointment, explained the situation to H and she said she could probably do more to help with any spotting (which had completely stopped by now) than western medicine could.  Also her “healer” lady, J was there so after she pinned me she went to ask her if all was ok.  H came back and told me J had assured her everything was ok with me and the baby (as I write this I know what a load of rubbish that was!).  3.00pm I rang EPU and a nurse told me I would be called back.  6.00pm I called EPU again and got their automated service, left my details whilst thinking they won’t call tonight.  They didn’t.

New Year’s Day (Tuesday) – as soon as EPU opened I called them and spoke to the same nurse I had done the previous afternoon.  I explained that although the spotting had stopped I was extremely anxious because of my previous 4 miscarriages.  Her response was the Sonographers were only in for a couple hours from 10.00am as they were running a Sunday service, and as my request had been made on the Monday they would probably call me back on Wednesday!  A mix of frustration, anger and exhaustion of having to fight each time I’m pregnant to get an early scan, I resigned myself to not hearing from them.  They called back and by 11.15am we were in EPU.

An ultrasound, a transvaginal scan that seemed to last for ages.  A silence that filled the room, leaving me panicking we would hear the word “miscarriage” again.  Then the sonographer started pressing my lower abdomen, asking me if it hurt – no, it didn’t.  Then she said it, “I’m afraid there’s nothing in your uterus, but there is a mass on or near your left ovary.  You’ll need to see the Dr to rule out ectopic pregnancy”.  How is that possible, I don’t have any symptoms of an ectopic?!  I was told to give a urine sample for a pregnancy test, which returned positive.  They then wanted a blood sample to see how high my HCG level was – it returned at 6,800.  Although they couldn’t confirm yet that it was ectopic, this hormone level meant surgery.  Had it been a lot lower, I think around the 1,000 mark, I could have possibly had an injection of Methotrexate to stop the egg developing and it would have been absorbed back in to my body.  A cannula was inserted into my hand for more blood tests, swabs were taken for various things, then the Registrar did an internal exam which hurt like hell and I leapt up the bed!  Mr R  and I then had to endure several hours waiting in the, by now closed, EPU whilst the Registrar waited for my blood results to come back and for a bed to be arranged on the next door Gynae ward.  Thank goodness EPU and Gynae are away from the main Maternity Unit so at least we didn’t have to see any pregnant ladies or babies.  I was eventually given a bed at 5.30pm and was told I would possibly have surgery that night.  1.00am the following morning another Registrar came to my bed and told me surgery would be about 9.00am as they’d had emergencies which had pushed mine back.  I’d been nil by mouth for almost 12 hours by now, thankfully he told the nurses to bring me food – a ham sandwich and banana has never tasted so good!  I was on 2 hourly observation so with that and nerves I barely slept, then just as I was dropping off to sleep I was woken again as they hooked me up to an IV in the early hours.  Again, just about dropping off to sleep when one of the Anaesthetists came to see me.  Oh well, I made up for the lack of sleep once I’d had the surgery.

Wednesday, 2nd January – Sister Rosie told me to change into my gown, not easy to do with a cannula in your hand but at least she disconnected the IV!  The Theatre nurse and Registrar who took me down were lovely, answered my questions and helped calm me down.  As I was wheeled into the room to be anaesthetised and was introduced to Mark, one of the Anaesthetists, and Ms Sawant the Consultant Surgeon I remember thinking I was in an episode of Greys Anatomy or similar, as everyone around me (about 6 people) were all so attractive!!  Ms Sawant asked me some questions, explained the operation again and asked if I consented to a D&C being performed should they find that it wasn’t an ectopic pregnancy.  Mark then placed a mask over my face, whilst another Anaesthetist gave me an injection.  I was told to take deep breaths and keep my eyes open.  The next thing I remember is being aware there were other beds and other people in the room, there’s a clock on the wall and I can make out it’s after 11.00am but I can’t focus properly.  I asked for Mr R and was then taken back up to the ward.

I was so poorly from the anaesthetic I had to be kept in another night and on an IV.  The following morning I was seen by another Registrar and 2 junior Drs.  The Registrar confirmed the pregnancy had been of 10 weeks gestation, which is what I’d always believed rather than my GP telling me I was 11 weeks, and was in my left fallopian tube.  It, along with my tube, had been removed via keyhole surgery.  He also assured me (as did the other Drs I’d seen throughout my stay in hospital) that having only one tube did not make a significant difference to our ability to conceive – 2% which is nothing – but my risk of an ectopic pregnancy has now risen to 1 in 10 rather than the 1 in 100 it had been prior to this one.

A week on the physical pain is easing.  Yes, my abdomen is still swollen and a bit tender, and it REALLY hurts if I forget for a moment and move suddenly or in a certain way.  The emotional pain comes and goes, and will for a long time I’m sure.  However, I have to remember it could have been worse.  Yes, I’ve gone through surgery, something I hoped I’d never need for this or any other reason, and am one fallopian tube lighter.  Yes, we’ve lost another baby, but we can and will try again.  However, I’m still alive – had I ignored the spotting, or had I not had any at all, in another week or two I could have been facing a rupture, internal bleeding and worst case, although extremely rare, I may not have been here to document this unhappy event in our lives. If you didn’t give up reading this post before the end then thank you!  Thank you also to some special friends (you know who you are) for your support, kindness and generosity.

I hope you all had a less eventful and much happier new year.  For us, 2013 can only get better!